COMMAND LINE INTERFACE (CLI)- DESKTOP VERSION PentaCLI-PRO is our professional Suite of Command Line Interface programs for PentaZIP-PRO and PentaSuite-PRO. We designed it for professional IT users but even users that have no prior DOS programming experience can use it thanks to the powerful Command Line Wizard which is part of the CLI package. PentaCLI-PRO is one of the very few Desktop software products that creates PGP Encrypted files as well as PDF files from the Command Line

What is CLIWhat does CLI do?How to use CLI CLI Wizard Compare CLI Features
The PentaWare Command Line Interface (PentaCLI) is available in two Versions: The Basic version consists of three programs that:

The Basic Version is included in all PentaWare products. The PRO version of PentaCLI is an integral part of PentaZip-PRO and PentaSuite-PRO. It supplies users with more command line interface programs that are fully integrated with those offered by the basic version. The number of available CLI programs varies in PentaZip-PRO and PentaSuite-PRO as outlined in our CLI Feature Comparison. These are the functions PentaCLI-PRO has to offer:

A very convenient Command Line Wizard that will make the creation of command line strings a snap is also included!

The purpose of the PentaWare Command Line Interface is to give our users a means to create unattended procedures that can be used on a recurring basis to perform backups, to save data (images, movies, documents, etc.) in the convenient and well known zip format as well as to perform other tasks. Using PentaCLI-PRO you can:

In addition you can:

These are just some examples of what you can do. The PentaWare Command Line Interface is useful for Network Administrators that have to plan, design and deploy automated tasks for their users or for themselves. It is also useful for the home user that wants to manage his or her data. Use the Command Line Wizard (included in the CLI package) to prepare command line strings quickly and easily avoiding the drudgery of hand coding.

You must insert the references to the PentaZip or PentaSuite program folders in your Path to be able to use the command line programs chZip, chUnzip, chSfx, etc.. To do so you must: 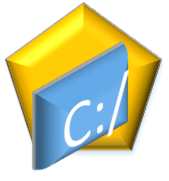 The PentaCLI Wizard is a program that PentaWare has created to make the creation of command line strings a snap. This handy GUI type tool allows you to fully concentrate on the things you need to when you are preparing a command line string. You just have to select the command line program you wish to work with, choose the options you need and our wizard will prepare the corresponding command line string using the proper syntax for you, thus eliminating completely the risk of syntax errors that have always been a problem with command line programs and hand-coded command line processing. The program offers the following:
Compare the availability of CLI features in our Desktop versions to see which product best suits your needs:
64 Bit Support All PentaWare products work properly and as expected on 32- and 64-bit systems as is required by Microsoft Certification Rules. Regardless of whether the platform is 32-bit or 64-bit, ZIP is offered as 32-bit (compatible with version 2.04g) as well as 64-bit. 64-bit archives produced using PentaZip can be opened using competing products. 64-bit archives produced using competing products such as WinZip and PKZip are properly opened and can be extracted from using PentaZip as well as our Command Line versions.